A Pet is a Lifetime Commitment

Keiko, a shihtzu with one infected eye hanging out of its socket, was dumped in a box on the sidewalk. The dog used to be a beloved house pet until her neglectful owner decided that he would not bring the dog for treatment at a veterinary clinic anymore. It was more convenient for him to throw out Keiko along with the rest of his trash in a box.

But Keiko, just like the countless dogs and cats abandoned on the streets, are at the highest risk for accidents and cruelty. They end up getting run over by vehicles, contracting diseases from other stray animals; or worse, they become easy targets of poisoning, stone-throwing or butchering by dog-eaters.

The homeless strays reproduce uncontrollably, and become hazards to public health as they are the number one source of rabies – a deadly disease transmissible to humans. As such, government-run city pounds have no choice but to catch these strays and euthanize them if they are unclaimed. An average of 200 dogs are euthanized every week at city pounds around the country.

A city veterinarian remarked, “People sometimes condemn city pounds for having to put down animals but, really, where do they think the animals will go? They cannot expect the city government to take care of the animals that they have refused to take responsibility for?”

HOW DO PETS END UP HOMELESS?

Pets are abandoned on the streets by people who have encountered financial difficulties and can no longer afford to buy pet food, when they find out that the cost of veterinary treatment is too expensive or when they just don’t have the time anymore to take care of their pets.

PAWS receives and average of 5 calls or emails a day from people who want to abandon their pets. The PAWS Animal Shelter, a limited-admission facility which takes in animals who are victims of cruelty, is already filled to the rafters with 185 cats and 35 dogs so it can no longer accommodate the sheer number or animals that are being abandoned everyday. PAWS Shelter Director Heidi Guzon laments that pet owners fail to think long and hard about the responsibilities of pet ownership before they actually get a pet. “Countless people buy pets on impulse and abandon them later on when the novelty of having a cute pet wears off.”, she says.

“A pet is a LIFETIME commitment,” Karylle explains. “When you get a dog or a cat, you have to be prepared to be its caregiver for the duration of its life which can be from 8-15 years. And this means providing proper food, exercise, medical treatment and plenty of love. I can’t imagine giving my pets up for any reason,” the dog-loving celebrity adds. “If ever I need to go out of town for tapings or shows, I make sure that they are taken care of by a family member or a friend whom I completely trust”.

PAWS says the campaign aims to remind the public that while pet ownership is fun and extremely fulfilling, one must never forget that it is also a serious responsibility.

“The word ‘Lifetime’ is emphasis of this campaign,” PAWS Program Director Anna Cabrera says. “It’s hard to think of long-term commitments when you see that cute puppy or kitten looking up at you. But to have a commitment to be there for your pet in sickness and in health and to grow old with him – that’s the ideal human-pet relationship that we are encouraging.”

PAWS Director Rich Ilustre explains why they chose Karylle for the campaign. “She has been supporting PAWS for the past 5 years and is a perfect example of a responsible pet owner. We did the photo shoot in a nice house together with some of PAWS’ shelter animals because we want to show everyone that pets belong in a home as a permanent part of the family and not on the streets.”

Karylle admits the pictorial was one of her most difficult because it involved animals which were quite tricky to direct.

PAWS wants to thank all the creative people who generously donated their time and talent to make the campaign possible like photographer Jason Penaloza, stylist KC Leyco and Lester Edgard Morales.

Pet friendly establishments like Bonifacio High Street, Eastwood City, Hobbes and SM Mall of Asia have all agreed to display the posters & banners. Eastwood Mall even sponsored a billboard for the campaign which can be seen at Edsa Guadalupe, the very first animal welfare billboard in the country.

“I’m very happy that everyone is supporting our campaign.” Karylle beams. “Animals don’t have a voice and that’s why they need us to speak for them. PAWS and I are encouraging everyone to be responsible pet owners and be a good example to others so that there would be less homeless animals on the streets.” 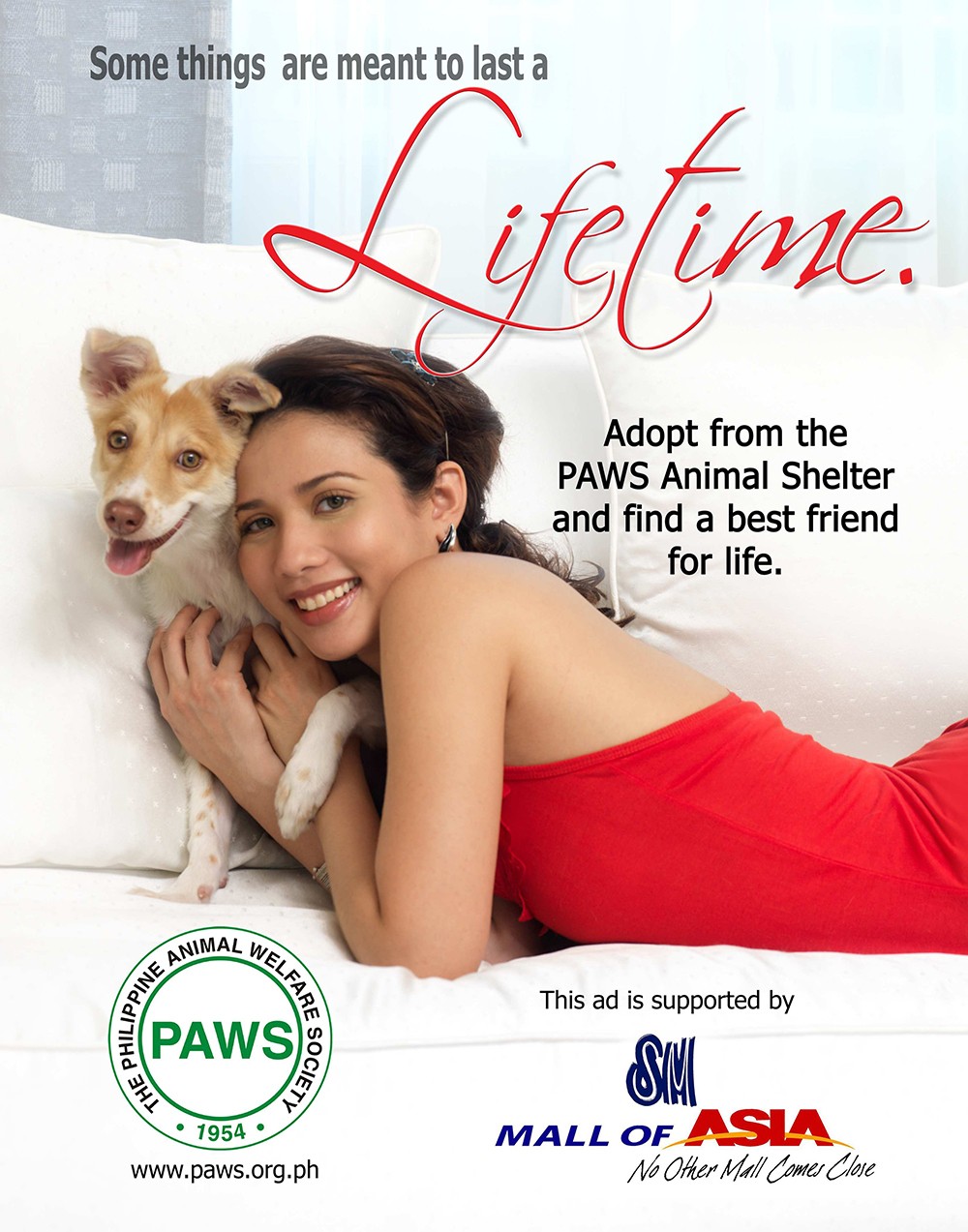 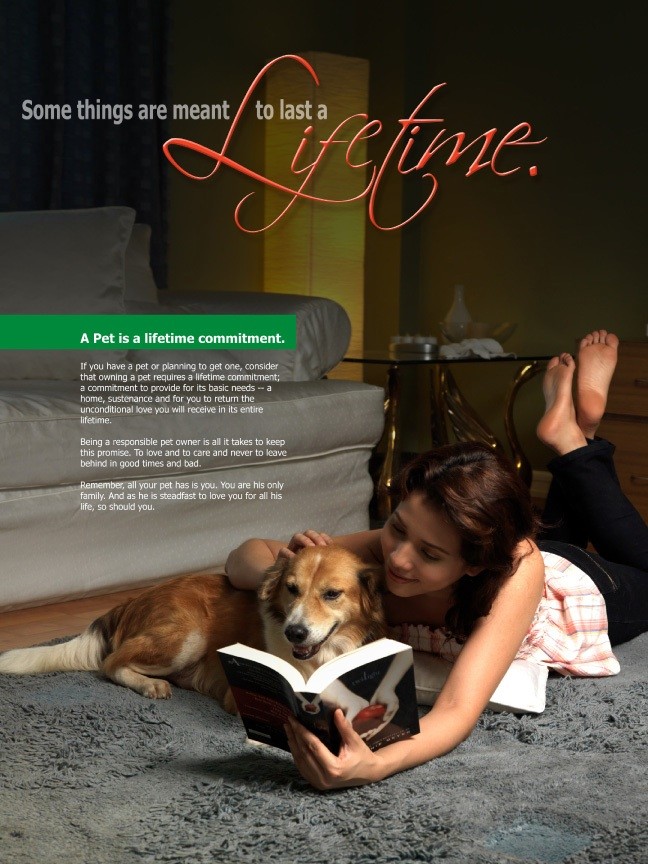 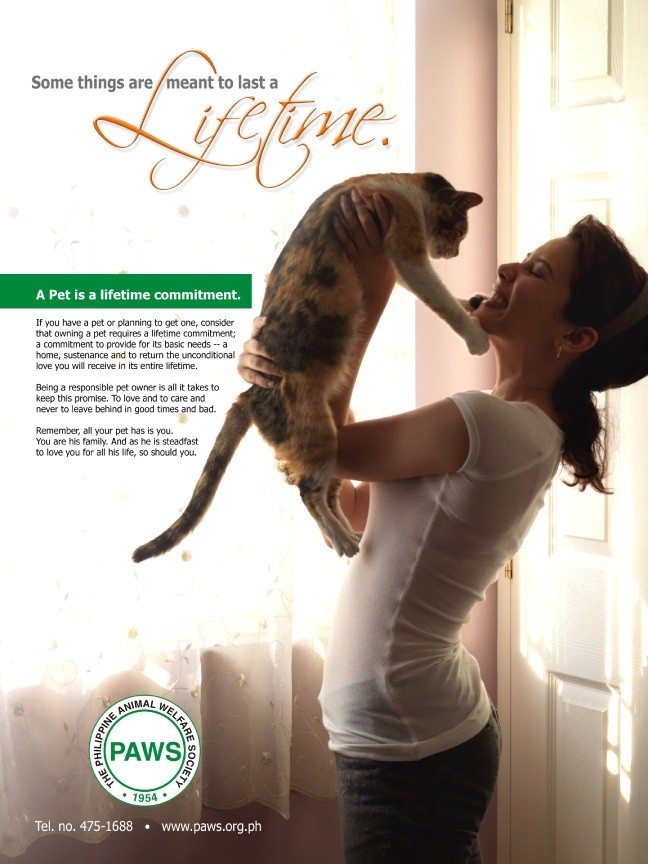