PAWS recently unveiled its latest “100% Beautiful” campaign featuring Charles, a mixed breed or mutt, with Heart, who is also a mix of Spanish, Chinese and Filipino.

If you just lost someone special in your life, get a dog,” said Heart Evangelista, spokesperson of the Philippine Animal Welfare Society (PAWS) “See Beauty Beyond Breed” campaign. “Better yet, adopt a dog from a PAWS animal shelter. Dogs give us unconditional love.”

Heart speaks from the heart.

She relates how she grew up with dogs. There was never a time in her life that her family did not have a dog. As a matter of fact, her father, who is a true pet-lover, allowed Heart and her sister to adopt dogs off the street if they felt that these dogs were being treated badly.

Today, Heart is human to 15 Aspins (Asong Pinoy) who live on a farm with her dad. “I have a German Shepherd named Yogi who lives with me in the condo,” she shares. “I have taught Yogi many things. I make time for him and he loves me back, unconditionally.” So proud is Heart of her Yogi that she quickly whips out her cell phones and shows me videos of Yogi unzipping a jacket, opening a cabinet door and even walking on the treadmill. These are some of the things that Heart has taught Yogi to do. “He is so smart,” she quips. “I sit down and show him what I want him to learn and he picks it up quickly.”

“I grew up with dogs Aspins and purebreds eating, sitting and sleeping side by side with us,” laughs Heart. “It has taken me some time to understand why such a discrepancy between breeds exists.’

Must love all dogs

PAWS has been campaigning for better treatment of Aspins since 2004. After all, it is quite true that native dogs stay outside and are tied up or caged or they are portrayed as the perennial bantay in Filipino comic books. Bantay is usually brown and shorthaired the type of dog that you would usually see on the streets. It is no surprise that he would always be referred to as Askal (Asong Kalye) even if he lives with a family and is never allowed to stray outside.

The uphill battle for Aspins

The contrast could not have been more glaring to a group that has been rescuing dogs for its entire existence.

PAWS, founded in 1954 and reactivated by Nita Hontiveros-Lichauco in 1986, saw that native dogs are often the victims of cruelty. It is the native dog that is always rounded up and killed and served as pulutan. Jokes about native dogs abound. One of them refers to the native dog as the Philippine “rice” dog because it eats only rice and leftovers. Purebred dogs, of course, would only eat expensive canned dog food or dry kibble.With the goal of changing society’s view of Askals, PAWS encouraged people to bring native dogs to their various fundraising events. For its Halloween pet costume contest, native dogs that came in their best outfits were given prizes and bragging rights as the “Halim-aw-aw Award” winner. PAWS put a native dog heat in “The Great Dog Dash,” where native dogs participated in a fun race against one another to win a gold medal.

What was even more groundbreaking was the native dog beauty pageant organized by PAWS in 2006. The top 10 finalists exemplified all the best qualities of the Filipino dog. Dubbed “Pinaka Magandang Hayop sa Balat ng Lupa,” it had all the elements of a beauty contest from the swimsuit category to the casual and evening wear competition.

In 2010, the PAWS Aspin Club was born. The goal of the club was to uplift the image of the native dog through bonding activities in fun events exclusively made for them. Changing the term Askal to “Aspin” or “Asong Pinoy.”

Heart says that the first time she ever came face-to-face with the issue of animal cruelty was when a female native dog ran inside their home to escape from dog killers who wanted to slaughter it for its meat. “I remember my dad was very angry and reported the would-be dog killers to our barangay,” Heart said. “We adopted the dog and I promised myself then that I would always speak up for these helpless animals.”

Heart is proud to be the PAWS celebrity spokesperson for the Aspin campaign. “I have a mixture of Filipino, Spanish and Chinese blood so I am also a mixture of ‘many breeds,’ so to speak,” she says with a big smile. “It is something to be proud of because Filipinos and Aspins are 100 percent beautiful.”

Heart says that her dogs are like her therapists. When she shares with them whatever is bothering her, Yogi sits and listens. “It is actually quite strange for anyone who has never had a dog,” shares Heart. “But for a dog owner, it is the easiest thing to understand.”

Heart wants to help PAWS work for the passage of House Bill 5849, which seeks punishment for anyone who treats animals cruelly. “I don’t understand how people who take the photos of animal cruelty are able to take the photos,” says Heart. “I would go down and stop the cruelty, not take a photo.”

The desire to stop cruelty to animals is tops in the agenda of Heart and PAWS. After all, it is hard to understand how anyone can treat a defenseless animal cruelly. “I don’t really get mad. But if I see a helpless animal being treated cruelly I will transform into the Incredible Hulk,” she laughs. “I would be more angry if an animal were treated cruelly than people, because people can defend themselves.” 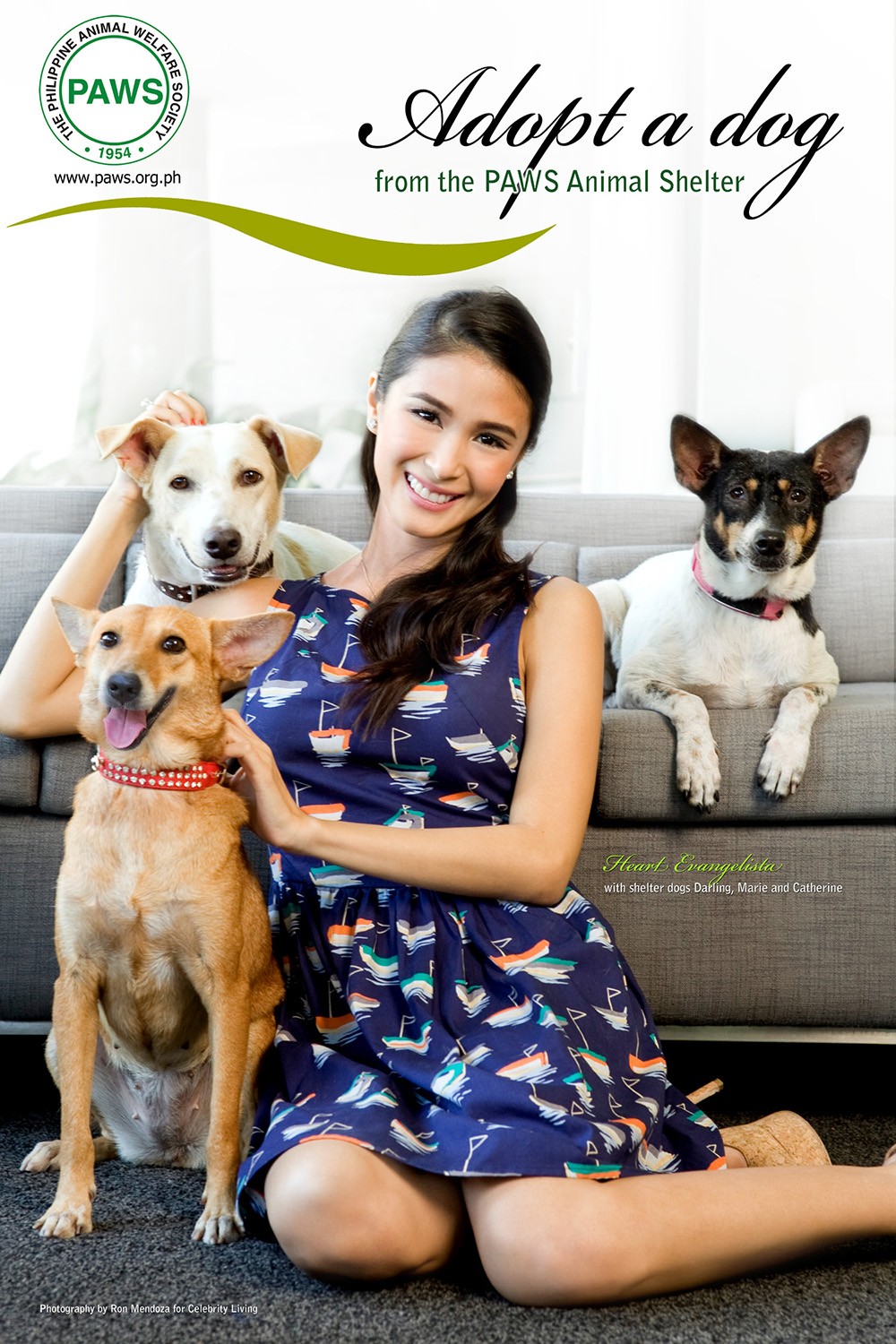